Campbell has been playing Bagpipes for the past 14 years. He started at age 4 on the practice chanter and taught himself some of the basics (which was easy considering he grew up around Bagpipes ) . Both of his parents are well known Professional pipers. His mom, Lezlie Webster was one of the top players in the USA/Canada winning prizes all over. His father, Gordon Webster was the Pipe Major of both the 1st and 2nd battalions of the Scots Guards as well as the 9th Sovereigns Piper to Queen Elizabeth the Second.

At age 7 he was winning all of the grade 5 practice chanter competitions. By age 9 he was the top player in Grade 4 junior. He has rapidly progressed through the grades and is now one of the youngest players in the professional ranks. He has travelled all over the USA, Canada and Europe performing ( NYC, San Francisco CA, Maxville ON, Montreal QC, Basel Switzerland, Italy, Scotland etc. ). In addition, he has been competing as a drummer both as a soloist and leading a corps. He currently teaches several drum corps in local Pipe Bands. Performances he does include playing smallpipes and drum kit. At a Highland Games he does many things Including being a professional Drum Major. Since age 3 he has also been a Fiddler taking lessons with Barbara McOwen. He plays and tours with the SCD band Tulloch Gorm.

He opened up his own business selling Pipes, Drums and Pipe Band Supplies when he was 14. He has enjoyed the great learning experience not only learning the business side, but getting a chance to help people learn more about the instrument and how to maintain it.​ 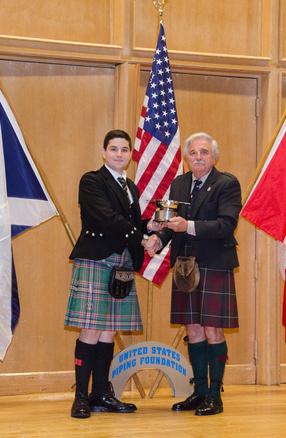